So every time I was asked the question ‘why don’t you write a blog post for the John Keells Blog?’ I always got out of it with my usual ‘what do I blog about?’ response. Well one can only play that card for so long! So here I am writing this blog. After much deliberation on possible topics and areas of interest and several unsuccessful starts, I believe I have finally found something to talk about.

As you probably gathered from the introduction, I am a bit dramatic, so it will come as no surprise that I chose to share my experience on acting for Group L&D. At the risk of sounding totally evil, I shall now delve into that enriching experience.

I had the opportunity of acting on a volunteer basis for Group Learning &Development activities twice in two very different roles. The first one, I had to play an emotional single mother on the verge of tears which was not an easy task. I just could not cry! Probably because I have a policy of not crying in public unless it is of course at a funeral. Years of studying drama helped bring out the intensity, but the tears just would not come. But I did learn that sometimes whilst you would think tears would make people uncomfortable and throw them off their guard, not crying but just being emotional and on the verge of tears is far more effective. It was quite the learning curve for me.

The second opportunity was a lot more fun for me personally as I was given the freedom to be totally dramatic. I could show a range of emotions – sarcasm, anger, defensiveness and the general holier than thou attitude – which was a lot of fun for me but not so much the participant. I was really able to put into play everything I learnt when studying drama. This especially was interesting for me because I was able to embody different characteristics of most of the roles I played over the years creating a character who was the definition of unpredictable, indignant and enraged. Many of them told me I was very difficult to please and they hope they do not have to deal with this situation in the working world. Of course this meant I had done my job as my sole responsibility was to make their lives difficult in that short span of 10 minutes.

Whilst my job was to support the participants learning, I didn’t walk out of with only the evil satisfaction of flustering them. Although the scenarios was the same, each situation was different as it depended on how the participant reacted to the scenario. The entire experience became about learning a valuable suite of soft skills that can help with team building, collaboration, leadership, and communication. Further whilst it is not ok to be difficult for the sake of being difficult (as was our instructions), based on the context it became evident that sometimes you have to be difficult in order to get the job done or taken seriously.

The lesson for me personally however, was the realisation that deliberate thinking, while valuable in a lot of contexts, doesn’t teach you to think creatively. Creativity happens when you switch off your analytical thinking and move towards expressive thinking. Having said my piece, I shall leave you with this interesting quote I found online.

“Life doesn’t come with a script. We are all actors in a play with no rehearsals, an unreliable cast and a wobbly set” – Tom Dudzick 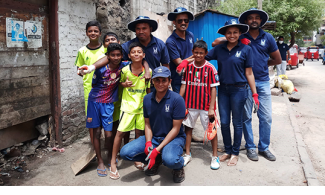