I’ve always been someone who was involved in, (for want of a better phrase), “social service work”, from a very young age. In recent years, I’ve assisted in building houses at a post Tsunami resentment village and assisted at Eye Camps but for as long as I can remember, I’ve been making baked goods for the Ceylon School for the Deaf and Blind “Jumble Sale”, or rushing a street dog who’s been hit by a car to the vet or taking in stray pups home until I can rehome them and assisting with Fund raisers of the Animal Welfare and Protection Association. Interestingly, when the President HR asked me at my interview for Manager Corporate Communications, what I wanted to do in terms of a career, I told her that if was sitting on a fat inheritance, I’ll make a career out setting up and running a shelter for stray dogs; luckily for me, she hired anyway!

Working at Corporate Communications at John Keells gives one the opportunity to be quite “hands on” in the activities of the John Keells Foundation (JKF). Corp Comms is responsible for both the internal and external publicity of all these CSR projects and initiatives- press conference or press release on the projects, and also, highlighting staff volunteerism in our Newsletters, Corporate Facebook page and website. This story came about when it was time for the JKF team, to schedule a visit in July 2014 to the villages adopted the previous year in Mullativu, under the Community and Livelihood Development initiative, to track to hand over 40 fishing boats, outboard motors and safety equipment to a fishing community. Further on the agenda was a visit to two schools in Iranapali and Puthumathalan. We were to also meet with the government representatives and leaders in the communities in these villages in Mullativu to ascertain further needs that may require our assistance.  The morning of the following day was to be spent at the BPO office in Jaffna as they celebrated their first anniversary.

As usual, Corp Comms organized the photographer and the video crew to document the field visit, but in addition, the two ladies heading CSR at John Keells, Nadija and Carmeline on separate occasions were pretty persistent that  that I come along on the visit. Taking time off on two week days was tough given the workload, but I was considering it even though I wasn’t sure how useful I would be – even to get voice cuts for the cameras from the beneficiaries I didn’t speak or understand Tamil!

I raised this concern with Carmeline and her response, verbatim, was as follows “Your primary role is to mobilize the camera crew and ensure we get strategic coverage at both Mullaitivu and Jaffna. Since this will also be material for our next CSR Video edit, we should obtain some beneficiary interviews as well. As Siva and Jehan are on board, they can facilitate interpretation. Of course this will also double up as a volunteer engagement for you and I’m sure you’ll be the richer for the experience!” There was no turning back after that response!

We travelled to the North by coach, breaking our journey in Habarana at Cinnamon Lodge for the night, where the team poured over the agenda and the talking points for the following day, to ensure all the strategically key areas are covered in the speeches and the meetings with the government agents and the community (while Chef Nimal let us sample his latest creations of unusual flavours of ice creams, including the amazing “kochchi” flavour!)

Armed with my mammoth straw hat I was ready to brave a full day out in the sun in hot, dry conditions walking around with the camera crew. Despite standing in the sun, covered in dust and sand (as the handover ceremony was held at a public playground) when I conducted interviews with some of the beneficiaries with the assistance of Siva as interpreter, there was no language barriers that could stand in the way of understanding the happiness they felt at that moment; it was obvious in their (some of them toothless!) smiles, and the happy tears in their eyes! Siva translated, saying that they had spoken of how they lost everything during the civil war, and today they had been given the strength to regain their livelihoods doing what they know best. We visited the school in Iranapali where the English teacher Reverend Suman,  spoke with immense pride about how his students who had enthusiastically participated and completed the English Language Programme we conducted there in the past year, and how they are now confident to attempt to converse in English. 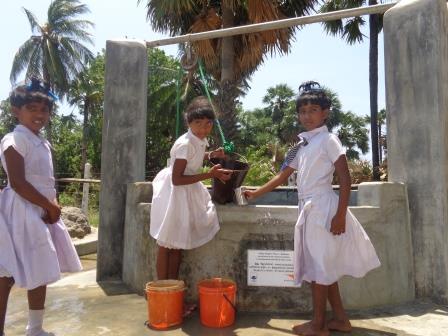 With regards to the water and sanitation project, I learnt that day, the reason for JKF to fund the building of a new well at the school in Puthumathalan (a village known as “the last battle ground” of the 30 year war on terrorism) was due to fact that during the conflict, the school well was used to as a human graveyard by the terrorists, and naturally, could no longer be used! The students and JKF volunteers made use of the new well, and the new toilets!

After the official part of the visit was over, (and I had fed every last crumb of the packets of biscuits I had with me to the stray dogs in the vicinity!) we walked a little way beyond the school, which to me, was one of the most amazing beaches on the Island, which is inhabited by a small fishing community where some of the boats we handed over earlier were delivered for immediate use, and spoke with some of the villagers. This was not a part of the agenda, neither was it planned, but this was volunteerism in social work, at its best, as I feel it was as important, as speaking with the leaders of the community.

Continuing our journey to Jaffna via Elephant Pass, stopping briefly for photo as the sun was setting on the rail track, we spent the night at Tilco (the hotel with the creepiest elevator music ever!) to meet with the Jaffna BPO Team. JKF’s BPO initiative, taking city jobs to the village was a first of its kind service, to provide sustainable employment to youth enabling them to work from the familiar environment of their hometown, where they provide finance, accounting and data entry services to the John Keells Group. The Jaffna BPO which commenced with 6 employees a year ago now has in its employment 10 staff members, 3 of whom are rehabilitated terrorist combatants. It was truly amazing to listen to these youth, speak with pride, confidence, and a sense of achievement about how the JKF gave them the opportunity, during a time when white collar jobs were scares in the region, to do a “city job”, without having to travel to or live in Colombo where they would have to spend most of their salary on transport and lodging. One of them who is now the CEO of the company spoke proudly about how John Keells brought them to Colombo and provided them training on systems such as SAP, which has greatly enhanced their skills. On the journey back to Colombo, I was proud not only to have been a part of the field visit to head these heartwarming stories, but also to be part of an organization that truly does give back to the communities we work in, to Empower the nations for tomorrow.   While this certainly not my first experience witnessing first-hand how the JKH have improved and empowered lives in our society, but it was one of the best. Carmeline was right; I am richer for the experience!