“Rebuilding Dreams” – My experience as a volunteer at HYB 2015

Travelling to Trinco has been a part of my “to do” list for many years. Having covered the east coast many a times, Trinco was a place, for some reason I could not cover at any point of my travel diary. When the opportunity arose through the John Keells Foundation, without paying much attention to the details of the project I jumped at the idea and opted to volunteer, since been a part of this project meant that I would finally get to visit Trinco.

Habitat Youth Build uses volunteer assistance in building houses which is a basic right for several families across the Island. As part of one of their projects to achieve this, the Habitat Youth Build 2015 took the initiative of building some houses already part of an Indian Government funded project in Trincomalee, using the assistance of volunteers. With the main motive of ticking “visiting Trinco” off my bucket list I attended the volunteer briefing which took place two days before the project, just to realise the extent to which I would be a part of an amazing journey of the lives a family not known to me. Yes, it was to help build a house, which meant laying bricks to mixing cement to all the “mason bass” jobs that one could think of.

Leaving to Trinco straight after work on a Friday evening meant a tiring journey as we would be travelling throughout the night, however to my surprise this thought never crossed my mind. Travel time  between Colombo to Trinco was passed unnoticed due to the quality time shared playing all sorts of games and also thanks to the chocolates which kept our hunger away – well at least it did for me.

We managed to reach  the location where we were supposed to spend the night, all thanks to the amazing driver who without much effort got us to the exact location on time.

After a much needed rest, on Saturday morning we headed towards Chaaya Blu where breakfast was arranged. With  a full  stocked system  with all sorts of protein and fat it was time to head towards Saampur where the build was to take place. The journey towards the site was breathtaking as the cultural differences, history and the lifestyle of the east coast and not to mention the beauty of nature drew me right in.

Having reached the location there were 23 other buses in which volunteers from all parts of the country had come for the same purpose as we did. The opening ceremony started by singing the national anthem which was followed by a dance act performed by few girls from the village. There was also a heartwarming welcome message shared by a little girl from the village. With over 600 volunteers from all over the country present at that particular location it was time to head towards the respective houses to start the build. John Keells put forward two teams of ten members each, named JK Builders and the Ge Kurullas.

All my life I twas quite confused towards the love and empathy I had towards dogs than what I had towards people. However this day was the day it all changed. House number 64 was the house which we were supposed to build and as we reached the entrance we were greeted by the couple (Husband and Wife) who performed the Tamil custom of welcoming people by marking a sign on our foreheads using Vibhuti and Kumkuma. I got to admit I had Goosebumps at that very moment as this took me by surprise and a feeling that no words can express. The purity of their thoughts and the sincere gratitude they felt towards us could be seen in their eyes and that moved me more than any other. Soon after we were greeted we  headed towards the foundation of the house which was already laid. We were given the task of making sure that the walls were built to a certain height. There were two main mason basses at the site who I’m sure took one  look at all of us wondered if we were even close to being able to do the kind of hard work they do for a living. With not much time spent we found ourselves mixing the cement and transporting the cement bricks from one location to another. The techniques of division of labour came in handy as the bricks travelled from one hand to hand another in changing its location closer to the wall that was been built. A few of us assisted in applying the cement mix so that the cement bricks could be placed steadily. To our surprise two walls were built in no time and we moved towards the third. This meant transporting the bricks to an entirely different location all over again. The boys mastered the art of transporting them by throwing them around from one to another, rather a scary option as the bricks were quite heavy and by any chance if landed on a foot it was heavy enough to smash and bruise a foot. Under the scorching sun not caring much about getting roasted, we all managed to build 4 walls which surrounded the house by lunch time. After a lunch break of less than 30 minutes we all got back to work. With all the heavy lifting, our bodies were bound to ache., however the motive of achieving our target gave us the energy we needed to finish off our project. It was quite blissful to see our hard work pay off. All the walls within the house too were built in no time. The house owners and the basses warmed up to us towards the end where they . too contributed towards our side jokes We were treated to a cup of freshly brewed ginger plain tea which we shared with the family and the basses. I’m not particularly a tea drinker however I was told that the cup of tea was a gesture of a warm welcome. With the clock striking 5, we managed to complete the task and we were quite proud of our achievement. We helped build a house! 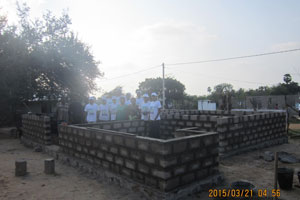 After refreshing ourselves from the water drawn out of the deep well in the house we bid farewell to the family. Seen them appreciate our work was truly a blessing. Been a part of the closing ceremony we learned that 70 homes were built which meant there were approximately 700 volunteers along with us helping the same cause.

Bidding farewell to a sun kissed weekend it wasn’t only visiting Trinco which I ticked off my bucket list, but also the fact that I have help create change and put a smile on the face of another.