My journey through two decades of “Kala Pola”!

The John Keells Group has been the proud sole sponsor and partner of Kala Pola, for 21, out of the 22 years this open air art fair has been in existence. I have been privileged to be involved with Kala Pola, first as a volunteer assisting  the project manager and then as the Project Champion for about 18 years! It’s now 2015 and we have completed the 22nd anniversary of Kala Pola!

Kala Pola which is an initiative of the George Keyt Foundation (GKF), was introduced to John Keells (JKH), when the then Chairman of the Group, was approached by the trustees of GKF, for the Group to become the custodian of the original works of art of renowned artist, George Keyt. From then on, JKH, took on the responsibility of sponsoring and organizing this event, in partnership with GKF to promote Sri Lankan art and artists as a CSR initiative.

Of the John Keells companies, at the time “Elephant House” or Ceylon Cold Stores (CCS), was probably the only business that had the island-wide brand strength and presence and the expertise in logistics to take on organising and sponsoring Kala Pola and my supervisor at the time Ashan, who was the manager special projects for CCS was given this mammoth responsibility. While I was always interested in CSR activities from my school days, that is how my involvement with this CSR initiative of John Keells commenced. 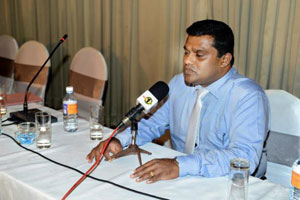 My memory over 20 years of Kala Pola, is a bit hazy, but I’m putting down what I can to the best of my recollection! After about 5 years of JKH’s involvement with Kala Pola Ashan left CCS and I was given the opportunity to become the CSR Project Champion.  Looking back, I can say that the CSR at John Keells, Kala Pola as an event evolved with changing times and grew to be a much looked forward to event, in the arts and “Colombo society” calendars of Sri Lanka! I feel that, the first Kala Pola we organised was like a primary school event, and I’m NOT ashamed to say it, as I’m so proud of what it has developed into now. The first year I was involved in Kala Pola, we had less than 50 artists and we had put up wooden stalls for the artists, and there was a lot of Elephant House Branding, advertising our entire product range and the stalls adorned both sides of “Green Path” (now renamed to Nelum Pokuna Mawatha) Colombo 07 and this format continued for about 3 years or so.  At that time, artists and art lovers in Sri Lanka were used to exhibitions by individual artists at the National Art Gallery or the Lionel Wendt Art Gallery, and perhaps only senior and established artists had the means to hold such exhibitions and purchasing art was limited, to the affluent buyer. Kala Pola changed this concept. Sita and Cedric De Silva, art lovers and trustees of the GKF took the initiative to contact senior and amateur artists alike, to take part in Kala Pola and making it a free public event held in a public place.  It was this effort and initiative that made Kala Pola to what it is today – an event that brings together nearly 300 artists and 25,000 visitors accounting for over Rs. 13 million in sales in a single day! Over the years, there were some significant changes we have tried; some worked, and others didn’t! With about 3 years of experience with Kala Pola, I felt that it was crucial that we introduce an ‘opening ceremony’ which will add a sense of occasion and importance to the event. Since then, we have always had an opening, or of late, an ‘official ceremony’, where the chief guest is always a foreign Diplomat – an Ambassador or a High Commissioner to Sri Lanka. However, when we introduced an opening parade with an elephant and even horses one year, and releasing of white doves by the chief guest as a symbol of peace, they were immediately discontinued, as we felt that we were not considering the welfare of the animals – the doves were attacked by crows and the elephants and horses, though tame and trained, had to be confined to small space!!!

The venue for Kala Pola has always been Green Path except for one year, when it was moved to the Slave Island railway station as John Keells took over the restoration and maintenance of this station, which was in the vicinity of the Group’s head office, as a CSR project. However, the lighting and the space available was not conducive to browse art, and so the venue returned to Green Path from the year following! In the early years, the only advertising for Kala Pola was a poster that was released the Friday before the event which traditionally, has been the last Sunday of January – to mark the 25th Anniversary, Kala Pola was a 2-day event, on the last weekend of January in 2013. Eventually, we began involving the media; we held a media conference, and had articles and TV interviews by independent journalists and trustees of JKF in the weeks prior to the event and in the last couple of years, we have been actively advertising on social media, through an Event page as well, targeting the younger art lover.  Even the press conference has grown into an event where we have had senior and amateur artists, both male and female and from all parts of the country, addressing the media in Sinhala, Tamil and English, and we have artists painting, and displaying their sculptures at the conference venue. Little things like this, I feel, go a long way to make the artists feel that they too are stakeholders of Kala Pola and gives them a sense of pride and ownership. From a JKH CSR point of view, Kala Pola has evolved – we no longer advertise our products and brands flags and cut as we used to and I am proud that JKH has taken this stance giving the focus as empowering Sri Lankan artists and promoting Sri Lankan art, as opposed to considering this a branding opportunity. It took some time, but with Nadija Tambiah and Carmeline Jayasuriya at the helm of JKH CSR, structure and processes was brought into the John Keells Foundation in terms of budgets, calling for quotations to ensure fair play and minimising expenses, involving more staff volunteers and providing support and guidance to the Project Champion and making Kala Pola and all other CSR activities more systematic and focused for the best outcome for both the social cause and the Group. I hope and wish that more and more staff members would volunteer for the diverse CSR activities of the Group. I feel it helps you think out of the box, you get to know new people across the group which helps with your ‘day job’ at the Group and you have the opportunity to genuinely help the needy and give something of value back to society. JKH recognises this commitment and appreciates the staffs’ contribution to CSR – I was rewarded for my volunteerism with A Chairman’s Award, and this to me is more important that if I was recognised for an achievement in my job.

When I took on Kala Pola, I didn’t know anything about art, and even now, my knowledge is limited. But every year, on Sunday night that Kala Pola concludes, I’m already thinking of ways that we can make the event better the following year. Kala Pola and CSR at John Keells gave me that passion, and I’m privileged to have had the opportunity! I believe through Kala Pola we gave Sri Lankan art a platform, we made original art a possibility in every household and I am so proud to have been a part of it!